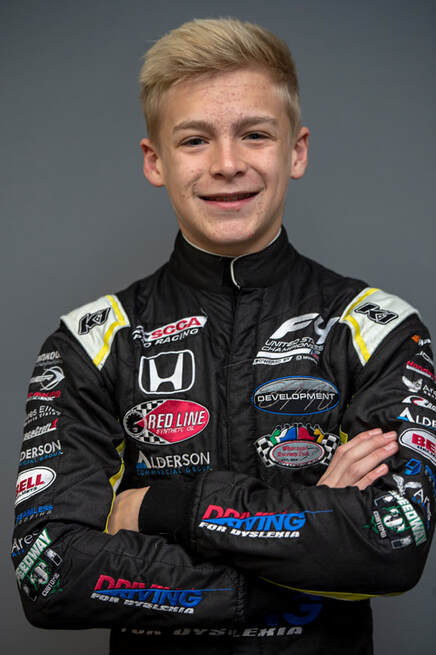 Elliot Cox is a fifteen-year-old racer from Indianapolis, Indiana. Elliot's dream is to become the youngest winner of the Indy 500. He is a team Driver for Sarah Fisher Hartman Racing Development, in their USF Juniors/Formula Development program. He is also an MPG Motorsports/ Will Power Kart Team Driver.

Elliot began learning to race as soon as he turned five, in the fall of 2012. His grandfather took him to buy his first kart, and from the time his foot touched the pedal, he was hooked.

Elliot accomplished his first win at New Castle Motorsports Park at the age of five, and has continued to win races, stand on the podium, and collect points championships as his career has progressed.


Off the track, Elliot is an honor roll student, and is in 10th grade. He races to raise awareness for Driving for Dyslexia, and also has volunteered with A Kid Again and Alex's Lemonade Stand. Elliot speaks in schools and at camps with the Joseph Maley Foundation, in order to educate other kids about Dyslexia and spread the message that Dyslexia doesn't stop him.

In September 2021, Elliot was the featured "Kid in the Spotlight" guest on "TODAY with Hoda and Jenna." He was featured on the front page of the Indianapolis Star on Indy 500 Sunday 2019, as well as the covers of South Magazine and Dystinct Magazine, highlighting his passion for racing and giving back to kids in need. He has been featured in several local Indy news stories on WTHR, Fox 59, and WRTV-6, featuring his Dyslexia advocacy and his racing career. Elliot has also participated in Dyslexia awareness campaigns and radio ads with the late Justin Wilson, who was Elliot's hero, Scott Dixon, and Stefan Wilson.